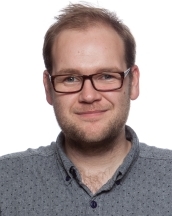 Michael is primarily based in the Department of Aerospace Engineering, where he is a research associate at the Bristol Composites Institute (ACCIS). Originally from Wollongong Australia where he obtained his undergraduate degree in Mechanical Engineering, he moved to Bristol in 2012 to pursue a PhD in composite materials, which he successfully completed in April 2017.

Michael’s research is concerned with the use of light and chemistry to both control and power novel machines and devices. This typically involves the use of pH-responsive hydrogel artificial muscles operating within chemical systems composed of photoacid generators and acid amplifiers. These systems mimic some of the key operating principles of actuating systems found in Nature, resulting in devices with superior functionality compared to those composed of more traditional engineering components. In the future, such work could find application in solar power generation, efficient aerospace structures and human safe soft robotics.